Difference between revisions of "Every thing, every time"

Case Study: EVERY THING EVERY TIME 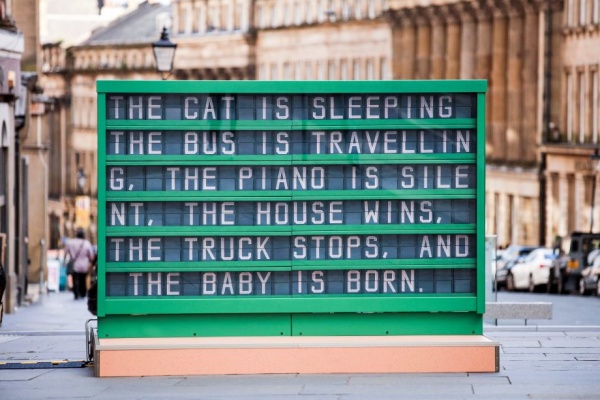 This iteration of Naho Matsuda’s data-driven artwork interacts with data from across the city provided by sensors from the Urban Observatory at Newcastle University and the buildings across the city centre. As Newcastle and Gateshead citizens pass through the city a poem is generated about their interactions in realtime, made anonymous and then displayed on a mechanical display outside the Theatre Royal in the city centre of Newcastle upon Tyne.

This version of EVERY THING EVERY TIME was shown outside the Theatre Royal, Grey Street, Newcastle upon Tyne from June 22nd to September 9th as part of the Great Exhibition of the North. Previous versions of the project have been shown as part of CityVerve, the UK Smart City demonstrator in Manchester.

“every thing every time is a piece of real-time digital writing, which is drawing from the many ‘things’ and ‘events’ and changes of ‘status’ that are constantly happening in Manchester,” says artist Naho Matsuda. “In every thing every time I have turned these data streams into narratives formatted as poems, that are stripped from their location information and any data transmitting purpose. Smart information becomes impractical poetry.”

"Come on a tour of Newcastle, told through the fascinating stories of the people who live and work there. Meet a local designer, an acclaimed musician and a mathematical cosmologist… to name just a few! In this podcast, Naho and Peter speak with eight very different specialists about their work and their thoughts on the city as a place of innovation, creativity and community."

EVERY THING EVERY TIME consists of a large wooden case housing six rows of 20 custom made split-flap display units. Each rotates to show alphanumeric characters or full blocks of colour. The artist designed a custom typeface for the work, creating a geometric sans serif typeface in a distinctive colour palette.

The letters are controlled by a custom-coded programme running on a series of raspberry pi mini-computers. The computer programme collects data from sensors placed across the city in which it is constructed, and using a bespoke algorithm translates these measurements into poetry about the city.

Most of the live data is taken from sensors deployed across the city by the Urban Observatory, a research group at Newcastle University who are interested in collecting and analysing information about the city. Static data is collected manually by the artist from schedules and timetables. The artist has also included extra information about human interaction in the city, mimicking the vision analysis of smart CCTV cameras.

With the rise of the ‘Smart City’ asking important questions of what we want from the future, where do we see ourselves in it? A meditation on the data that passes through the fabric of the city each day, EVERY THING EVERY TIME questions not only the role data has in our lives, but the use and value it has as it is collected. Can we see the urban landscape differently through the technologies that make sense of it?

Sharing data in this way encourages different kinds of engagement through a visualisation of the city's own data.