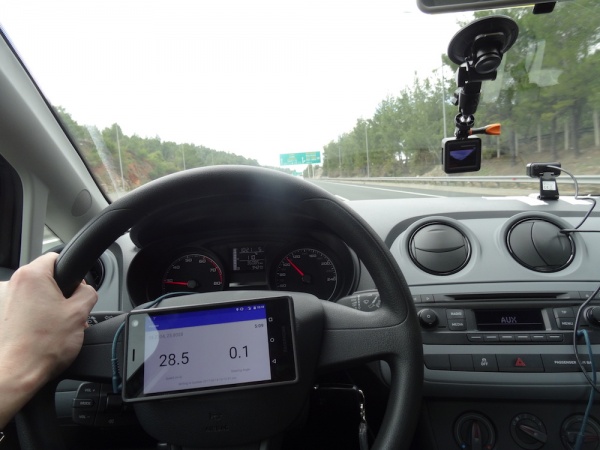 James Bridle is an artist and writer working across technologies and disciplines. His artworks have been commissioned by galleries and institutions and exhibited worldwide and on the internet. His writing on literature, culture and networks has appeared in magazines and newspapers including Wired, Domus, Cabinet, the Atlantic, the New Statesman, the Guardian, the Observer and many others, in print and online. He lectures regularly at conferences, universities, and other events. New Dark Age, his book about technology, knowledge, and the end of the future, is published by Verso (UK & US) in 2018. More details of his work can be found on his website.

link to video about the project

Artist James Bridle constructs a DIY driving system from open source code and off-the-shelf components in order to conceptually explore autonomous transport mechanisms. Directly challenging the value system at play, rather than optimising for the fastest way to get from A to B, or for concerns as prosaic as fuel consumption, Bridle’s machine is designed to get lost:

“Rather than entering a desired destination and sitting back, surrendering decisions over routing to the machine, in return for a guaranteed arrival, my self-driving car plots a random course, taking every available exit, off-ramp and side-road in order to prioritise the journey over the destination.” [1]

Austeer is a “simple Android app for tracking movement, speed, and steering angle for self-driving car development using neural network training, to supplement dashcam or other video footage” [2]. The app works in concert with several cheap webcams and a laptop, in order to collect vehicle data such as location, speed, angle and a forward facing dash-cam video. The data is processed using an open-source machine learning system [citation needed], not dissimilar to the systems used by Google, Uber and Tesla in their own investigations into autonomous driving technology.

Rather than focussing simply on human tasks the machine may be able to replicate, such as finding the fastest route, steering around obstacles, or freeing some (or all) of the drivers attention from the task at hand, Bridle’s artwork expands notions of human autonomy, agency and trust.

"Self-driving cars bring together a bunch of really interesting technologies-such as machine vision and intelligence-with crucial social issues such as the atomization and changing nature of labour, the shift of power to corporate elites and Silicon Valley, and the quasi-religious faith in computation as the only framework for the production of truth-and hence, ethics and social justice.(..) The attempt to build my own car is a process of understanding how the dominant narratives of these technologies are produced, and could be changed. "

Austeer challenges some of the most basic assumptions a self-driving system might be based on: from ideas around what might constitute a desirable feature-set, to notions of trust and human control.