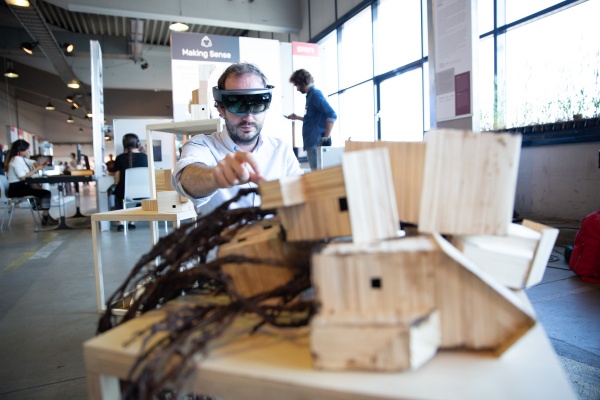 ATLAS is a hybrid work which exists somewhere between digital arts and visual arts, in the form of an interactive and a scenographic exhibition combined (which is to say a mix between real, physical models and an interactive virtual world).

ATLAS is initially observed as a collection of crafted model buildings in the real world, an organic village in miniature sprawled across the exhibition space. Once the spectator puts on the Augmented Reality (AR) headset a new and virtual geography appears, the physical models sit astride an archipelago of imaginary islands.

Inside this private topology spectators are invited to build virtual cities, and in so doing the passive spectator becomes active. A custom “seed launcher” protocol within the AR environment enables the participant to launch a seed which grows into a new, virtual, house which grows in amongst the physical townscape.

The growing houses follow a set of urbanistic rules chosen by the artists, but they also adapt to their environment: cities in the clouds, uprooted cities, cities on stilts, cities in flight. These cities take on a life of their own, with or without the interactions of users, much like living organisms. The names of these cities are inspired by forgotten or immersed cities: Xanadu, Canope, Kerma, Kitej.

Atlas provokes a reflexion on the topics of urbanism, architecture, and their influence on our lifestyles.

This article describes some of the preparatory work undertaken at Oxford Brookes University in 2017 as part of a residency programme.

‘I am an artist using mediums like Virtual Reality or Mixed Reality, to create experiences that question the relationship between the spectator, the artwork, and the artist. I'm working in collaboration with Marie Losseau, a visual artist who build handmade 3D models, using woods and cardboard. I usually work in the motion-graphic design field, mainly for cinema and documentaries. So, "giving life to inanimate things" could be a good description of what I do.’ - Yann Deval [2]

Deval is an Interactive designer, motion-designer, and musical composer. After studying the history of cinema in La Sorbonne (Paris), he continued his studies in editing and post-production in Cannes, finally settling down in Brussels in 2006. Here he developed his activities as a motion-designer and VFX artist. He works for the film industry (Mood Indigo by Michel Gondry, The Brand New Testament by Jaco Van Dormael), in music-videos (Puggy, Sacha Toorop), has worked on documentaries for Arte and tv-shows for France Television. Between 2012 and 2017, he co-directed the virtual reality performance IMMERSIO (SAT Montreal, ADAF Athens, SignalOFF Prague, Wisp Festival Leipzig, Bozar and Halles de Schaerbeek Brussels…).

Losseau is a scenographer and visual art designer by trade. She studied scenography at La Cambre / Brussels and visual arts at ISPG Brussels. Her work centres around the arts of scenography and visual installation. She also facilitates and organises workshops for children and adults. Further examples of her scenography can be seen in the trailer for Crayons de Famille.

The AR technology used in ATLAS has been developed through WEKIT, an ambitions three year European research and innovation project, supported through Horizon 2020. WEKIT, or Wearable Experience for Knowledge Intensive Training, aims to develop and test a novel method for industrial training enabled by smart Wearable Technology (WT). The wearable used for the ATLAS project is based on Microsoft's HoloLens.

The thirteen WEKIT partners represent academia and industry from six European countries. The project aims to build a ground-breaking industrial-strength learning technology platform with an accompanying methodology which will enable the capture of expert experience and facilitate sharing of this experience with trainees using a process of immersive, in-situ, and intuitive learning.

In the context of ATLAS, the use of Augmented Reality technology allows the audience participant to make changes in the world they are seeing as part of the exhibit, and to watch the effects such changes in real time.

The use of the WEKIT headset inside a physical framework has implications for the artistic expression of elements of Smart City technology, and for a creative use of Wearables. Therefore the ATLAS project has interesting connections to be made with both MONICA and SynchroniCity